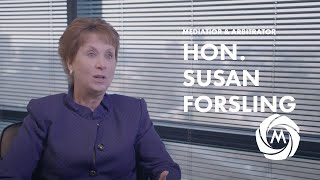 Hon. Susan B. Forsling served as Judge of the State Court of Fulton County in Atlanta, Georgia, from 1997 until July 1, 2013, when she was appointed as a senior judge by Governor Nathan Deal. As a state court judge, she presided over general and complex civil and misdemeanor criminal cases and also presided over the Fulton County DUI Court Program. During this time, Judge Forsling also served as a pro hac Judge of the Fulton County Superior Court. From 1992 until her judicial appointment in 1997, Judge Forsling was the Fulton County Attorney, serving as chief legal officer for the government. She was formerly a partner in the law firm of Young & Murphy and was a Special Assistant Attorney General.

Today, she serves as a Senior Judge and as a mediator and arbitrator specializing in cases involving Personal Injury, Premises Liability, Medical Negligence, Wrongful Death, Professional Liability, Commercial Contracts, Local Government, Civil Rights, and Bad Faith Insurance Claims. She has been recognized as a member of the National Academy of Distinguished Neutrals and the Georgia Academy of Mediators and Arbitrators. In 2017, Judge Forsling received the prestigious distinction of “ADR Champion” by the National Law Journal.

Judge Forsling has served as an adjunct professor of pre-trial litigation at Emory University, a faculty member of Atlanta College of Trial Advocacy, a faculty member of the National Institute of Trial Advocacy. She has also served as a Master of the Bleckley Inn of Court and is a member of the Lawyers Foundation of Georgia. She has been a member of the Georgia Supreme Court Commission on Public Trust and Confidence in the Judiciary and of the Panel to Recommend Candidates for U.S. Magistrate Judges to Judges of the U.S. District Court. Judge Forsling has also been active in the State Bar of Georgia, the Atlanta Bar Association, the Council of State Court Judges, and the National Association of Drug Court Professionals. She speaks locally and nationally on topics relating to the trial of complex civil cases.